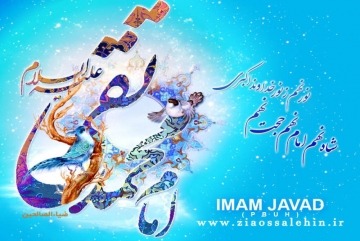 A few of the excerpts

The extraordinary work of the ninth Hujjat of Allah
Just as the prophets had miracles for their claim, “Prophecy”, each imam also used miracles to prove its imamate to extraordinary things beyond human power. Therefore, in addition to the imam’s appointment to imamate succession, imams have brought miracles to the people in moments of time to show the power of Imamate.
Imam Mohammad Taqi Salavat Allah has also shown miracles in this regard, which makes it clear the eyes and confidence of the Shiites, and, on the other hand, makes Scott the enemies and democrats of the Prophet’s place.
Examples of these miracles, including the announcement from within, the knowledge of the unseen, the news of the future, the invocation of prayer, capture in nature, etc., are as follows:
Amazing scenes
Hakimah – the daughter of the Prophet Moses bin Ja’far and the sister of Imam Reza (peace be upon him) – states:
When Imam Reza (peace be upon him), Imam Reza (peace be upon him), came to me along with his wife, the mother of Imam Jawad (peace be upon him) – with one midwife (midwife) in a room and closing the door of the room when Imam’s birthday was approaching. When the midnight arrived, suddenly the lights went off and the room was dark; and we were upset and amazed at what darkness we were in this sensitive situation.
In the same anxiety and anxiety, the pain of the birth of the bamboo began, and after a while, the blessed and luminous presence of Abu Jafar, Mohammad Jawad (peace be upon him), was born from his mother and, with the advent of his lightning, the entire room was illuminated.
Hakimah says: “I said to my mother,” God Almighty, because of the blessed presence of this beloved baby, God bless you from the light and light of the light.
So when the baby was on the ground, he sat down and the light of the radiance of the Divine array swept all around his body until he arrived in the morning and his great father, Abu al-Hassan, Ali ibn Musa al-Reza, called on Ali Salam, and embraced the dear Baby with a smile. ; And after a moment, he put him in a cradle, and said to me, “O worship! Try to stay side by side.
According to the wisdom, the following statement says: “When the third day came, the dear baby raised his eyes to the sky, and then he looked to the right and left, and then he said with a clear tongue:
“أشود أن لا إله إلا الله, وحده لا شریک له, و أن محمدا عبده و رسوله”.
And when I witnessed the unity of Allah Almighty and the Prophet Muhammad, the Prophet Muhammad (PBUH & HP), I was very surprised and surprised, and I got up in the same situation and came to Imam Reza (peace be upon him) and said: : I saw a very weird and weird scene!
Imam (pbuh) said: “What have you seen; what astonished you?”
In reply to my prophet, “This little baby said this and said so, and told him all the flow.”
When Imam Reza (peace be upon him) heard my speech, he smiled and then said: “You will see more miraculous and extraordinary things.” (1)
۱) Ibn Shahr Ashshub: 4/394; Al-Shahab: 504.
Exclusion of Prayer

Abu Hashim says: “On the day when Imam entered the garden, I said:
I am eating a very greedy fig, pray now, so that God will comfort me from the plenty of figs. After a few days, he said: “Or God of Abahash, the love of having eaten figs out of your heart, and after that, I hate the fig tree.” Came
In another narrative this is quoted:
Abu Hashem said: “I have come to the garden of Imam Jawad (peace be upon him) in the garden of service,” I said, “Sir, I am accustomed to eating the soil; pray Allah to remove this habit from me. Imam (as) did not give anything. After a few days, he said: Abu Hashim used to get drunk? I said: “Sir, I do not see things worse now (I do not have any interest in it).”
Understanding inside people 1

Mohammad bin Ali Hashemi, an opponent of the provincial governor, said: “On the morning of the day Imam Jawad (peace be upon him) with my daughter’s marriage daughter, I had received her medication and I had been drinking that drug that was thirsty for me and I was the first one to be in that morning I came to my service and did not want to ask for water.
Imam (pbuh) looked at my face and said: I think you are thirsty!
I answered: yes.
He said: “O servant bring us drinking water.”
I said to myself, they are poisoning water now.
So sad and distressed. The Ghulam came and brought water. The Prophet glanced at my face and said: “Give me the water!”
He took it and ate it (so I can make sure it was not poisoned). Then he gave me, and I ate it. Once again I was thirsty and I was disgusted to ask for water. The Prophet said: Are you still thirsty?
I answered: Yes.
And the servant brought water again. It occurred to me that they certainly had poisoned water this time, so I was afraid of drinking water. At that time, Imam Ali took the cup and took some drinks and then gave me the rest, while he was smiling. Mohammad says: I saw that I believed that Shiite beliefs about him were correct that he was aware of the hearts of the people and the secret secrets. (2)
۲) Sufficient Principles: 1/495; Detection of Reflection: 2/360; Mohajer Al Bayda, 4/303.
Knowledge within people 2

Big news weekly newsletter
Get a helpful email every week by subscribing to our newsletter!
You can cancel your membership at any time!
You might also like More from author
Imam Javad

Scientific office in front of Jawad peace be upon him